Third World War Has Never Been So Close – Alexander Dugin 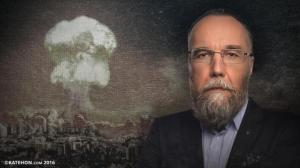 As we have already said many times, the main aspect of this political season is not elections, but war. But if elections do have importance somewhere, then this is in the US where, once again, they are closely connected to war. Two days ago, on Saturday, September 17th, the likelihood of this war was breathtakingly high. As we know, American troops, who no one ever invited to Syria, bombed the positions of the Syrian army at Deir ez-Zor. As a result of the bombing, 60 Syrian soldiers were killed.

This strike was extremely important for ISIS militants, whom the US is informally advising and arming while supposedly fighting them. This crossed the line. Bombing Syrian soldiers is one thing, but this means declaring war not only against Syria, but also Russia, which is fighting in Syria on Assad’s side. And this means that we have reached a climax.

Sure, the US leadership immediately reported that the airstrike was a mistake and warned the Russian leadership not to express any emotions. But Americans can only be lying, as modern technology allows satellite objects to be seen from a desktop. Theoretically, American bombers could not have simply confused such a strike. And what’s most important: if they had told you that they were preparing to bomb you, and you said nothing, then does that mean you agree?

It is completely obvious that the US is preparing to start a war against Russia. Border incidents represent reconnaissance operations. But how will Moscow, Putin, and the Kremlin react? The point of no return has not yet been crossed, but did Moscow’s reaction not show just how many Russians are ready for a direct, frontal confrontation with the US and NATO? This was why the airstrike was launched against Syrian army positions.

The globalist US leadership obviously cannot rule the whole world and, what’s more, the threat posed by Trump puts their control over America itself into question. Now, while the puppet Barack Obama is still in office and the globalist candidate Hillary Clinton is falling apart in front of American voters’ very eyes, is the last chance to start a war. This would allow them to postpone elections or force Trump, if he were to win, to begin his presidency in catastrophic conditions. Thus, the US neoconservatives and globalists need war. And fast, before it’s too late. If Trump gets into the White House when there will be peace, then there will be no such war, at least for the foreseeable future. And this would spell the end of the omnipotence of the maniacal globalist elites.

Thus, everything at this point is very, very serious. NATO’s ideologues and the US globalists falling into the abyss need war right now – before the American elections. War against us. Not so much for victory, but for the process itself. This is the only way for them to prolong their dominance and divert the attention of Americans and the whole world from their endless series of failures and crimes. The globalists’ game has been revealed. Soon enough, they’ll have to step down from power and appear before court. Only war can save their situation.

But what about us? We don’t need war. Not now, now tomorrow, never. Never in history have we needed war. But we have constantly fought and, in fact, we have almost never lost. The cost entailed terrible losses and colossal efforts, but we won. And we will always win. If this were not so, then today we wouldn’t have such an enormous country free from foreign control.

But in this case, we need to buy as much time as possible. The Americans have essentially attacked our positions, like the Georgians in Tskhinvali in August 2008. Russians are under fire, and this cannot be ignored. Our reaction is extremely cautious and balanced. We have expressed what we think about this American act of aggression, but in very deliberate terms.

The fatality of the situation lies in that, if Washington decides to opt for war now, then we cannot avoid it. If they will insist and repeat the September 17th situation again and again, then we will have to either accept the challenge and go to war, or knowingly admit defeat.

In this situation, the outcome of the struggle for peace which is, as always, fully in our interests, does not depend on us. We really need peace, to buy time until November 8th, and then everything will be much easier. But will the collapsing colossus allow us this time?

God forbid that this happens. But those who could pray prayed on the eve of the First and Second World War. In any case, our goal is always and only victory. Our victory.

The Americans are bombing our guys. A Third World War has never been so close.

Our website QuemadoInstitute.org has been subject to frequent intermittent blocks to access this past week, in which a page stating error “Site not secure” appears in place of the website. Contrary to what the error page states, this is not due to any problem in our site configuration.

Coincidentally—or perhaps not coincidentally—our website provider WordPress’s customer support is also closed until September 26, so we cannot fix the problem.

If you have encountered an error page trying to reach us, please comment here. This will help us determine the source of interference. In view of the fact that WordPress claims their sites cannot be hacked, we suspect censorship, since the powers-that-be are facing particularly crucial challenges right now, particularly after the US bombing of Syrian troops and Hillary Clinton’s critical illness.