Russia may back Donbas independence if no other options are left 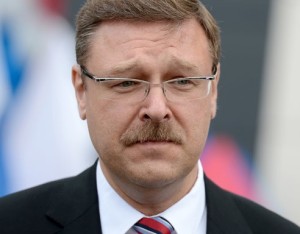 Russia may support independence of the self-proclaimed Donetsk and Luhansk People’s Republics if no other options remain for the settlement of Ukrainian crisis, the chairman of the upper house’s international affairs committee told Kommersant.fm radio on Friday. “I don’t rule out this option if and when all other possibilities to reach political settlements will be exhausted,” said Konstantin Kosachev in reply to the query whether Russia should support creation of ‘an independent Novorossiya or Donetsk People’s Republic-Luhansk People’s Republic’ if their authorities announce this decision.

The parliamentarian said that the decision on the future of these territories must be reached on the basis of mutual respect for the interests of the conflicting sides. “Russia should not say ‘no, you must certainly be a territorially integral state’ or ‘no, you will never be a territorially integral state, you must divorce,’ or ‘only federalization’, ‘only autonomy’ or ‘only decentralization’,” Kosachev said. “And pay attention that we don’t exercise such approach, and the president as well as the foreign minister have repeatedly said ‘Multivariance’. The main thing is to see accord and mutual content in arriving at the final option,” he said. “The chance for it is colossal, and this is the only thing that Russia, the United States, the European Union, NATO and everybody else must support,” Kosachev said. 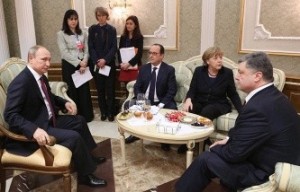 The Belarusian capital of Minsk hosted on February 12 summit talks of Normandy Four leaders — Russian President Vladimir Putin, Ukrainian President Petro Poroshenko, French President Francois Hollande and German Chancellor Angela Merkel. The 16-hour marathon summit negotiations ended in a package of agreements, which in particular envisaged ceasefire between the Ukrainian conflicting sides starting from midnight on February 15, withdrawal of all heavy weapons by both sides, a dialogue on political future of parts of the Donetsk and Luhansk regions, as well as a constitutional reform in Ukraine with adoption of a new constitution by the end of 2015, decentralization being among its key elements.

“This is in no way fits into the Minsk agreements. I see that they are following their favorite goal: discrediting, provocation, and rocking the boat,” Plotnitsky said.

Ukrainian President Petro Poroshenko on Thursday signed a decree to redefine the eastern regions of Donetsk and Luhansk as “military-civilian administrations.” 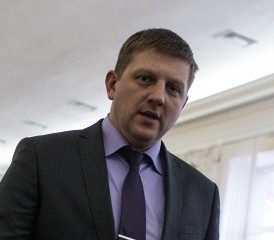 “If Kiev assigned them [the administrations], let them stay in Kiev. Here, we do not recognize or accept them,” the LPR leader added. Also on Friday, Alexei Karyakin, speaker of LPR’s parliament, called the reclassification of Donetsk and Luhansk a ploy to strengthen Kiev’s blockade of the regions. “This goes against the Minsk accord… This is one of the moments that exacerbate the situation,” Karyakin said.

On February 12, leaders of Germany, France, Russia and Ukraine worked out a set of measures in the Belarusian capital to alleviate the conflict in southeast Ukraine. As part of a 13-point deal, the warring sides must observe a ceasefire, withdraw large-caliber arms and conduct prisoner exchanges. Additionally, the latest Minsk agreement required Kiev to decentralize power ahead of wider constitutional reform in the government of Ukraine.

Like Loading...
« Kerry Re-writes History of U.S. Support for Color Revolutions
People’s Council of the DPR Adopts Two Fundamental Laws Regarding Labor Relations in the Republic »