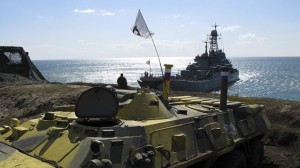 Washington’s Warmongers Gallop Toward War, says Paul Craig Roberts, posting a link on his website to a detailed and unsettling RT commentary exposing the vast scale of US and NATO military exercises in Europe and the Black Sea mirrored by Russian drills across its own territory and in the Baltic Sea. The RT report with photos, videos and additional articles may be found at Russia warns NATO drills a ‘problem’ as US attack planes buzz Poland (Mar 26).

Paul Craig Roberts provides his own startling commentary on perilous US war scenarios and reckless military strategies. “Nuclear weapons are part of the global strike plan and have been elevated for use in a pre-emptive first strike, a dangerous departure from their Cold War role,” says Roberts. His detailed analysis is located at at Manufacturing Dissent — Paul Craig Roberts, (Mar 26).

“The wars with Iran and Russia that the New York Times is encouraging will be much more dangerous than the wars with Iraq and Afghanistan. Humanity might not survive them.” — Paul Craig Roberts.

[For updates on the Donbass war, see our News from Novorossiya page, or click here.]