A photo exhibition took place Saturday July 11, 2015 at Shcherbakov Central Park in Donetsk. The purpose was to expose the destruction wrought against innocent civilians by the United States military around the world, executed in the Orwellian name of “peace”. The Donetsk People’s Republic continues to demonstrate enlightened moral leadership, and shines like a star in the realm of global affairs.

We thank DPR officials for expressing respect for ordinary Americans, many of whom deplore the hawkish policies of their government gone awry, and for assigning responsibility to Washington. The issue of responsibility remains, however, complex. Even US officials are believed to be puppets of hidden higher powers, as we argue in our analysis at the end of this post.

We first present two short articles on the photo exhibition in Donetsk. After that we introduce a more troubling commentary by Pravda columnist Xavier Lerma, in which he exposes US atrocities across the globe and especially in Ukraine. Critical analyses by renowned authors Eric Zuesse and Paul Craig Roberts follow.  At the end we present the opinion of Quemado Institute.

US army in Ukraine (–inserbia.info)

The exhibition “Funeral US”, dedicated to the tragic consequences of US foreign policy and organized by the NGO “Young Republic” opened today in the Shcherbakov Central Park of Culture and Rest in Donetsk. “I must point out that we are respectful to the people of the United States. If we held this event on the Fourth of July, US Independence Day, as planned, this step could be regarded as disrespect for ordinary citizens, and we have targeted the exhibition at the US government, their actions, and it has nothing to do with ordinary Americans,” stressed the head of the patriotic group “Young Republic” Nikita Chios in an interview with Trend. According to Chios, the photo exhibition will allow the citizens of the Republic to assess what is happening in Donbass in the context of the global situation. “We expect that young people will draw conclusions from this exhibition and lectures we have conducted. We expect that people take a fresh look at the military situation in our Republic from a different angle, a different mood,” said the representative of “Young Republic”. As part of the exhibition it is demonstrated what has happened in countries where the policy of Washington and its allies are trying to “make peace.” Also a lecture was held for visitors of the exhibition on the impact of “peace initiatives” of the US.

The photo exhibition called “Funeral US,” which opens in Shcherbakova Park [Donetsk] on July 11, will help you understand the true meaning of “peace initiatives” in Washington. This was announced at a press conference by the head of the creative department of the DAN public organization “Young Republic” Alexander Tarasov. According to him, the exhibition will show what happened in countries where the world tried to establish the policies of Washington and its allies. “We will show what happened before and what happened after in countries such as Iraq, Afghanistan, Syria.”

“We will exhibit also ‘the best employees of the month’, because of whom the tragic events happened: Poroshenko, Saakashvili, and Obama,” he added. In turn, the head of the “Young Republic” Sergei Kondrykinsky noted that “now there is a war, we can say, a redivision of the world, and people need to show to whom this war is happening.” Kondrykinsky concludes, “That’s what we want to do with the help of this exhibition.”

Pravda columnist Xavier Lerma sums up the atrocities perpetrated by the United States around the world, citing greedy trade practices and hawkish military strategies, with an emphasis on the horrors in Ukraine, which media-brainwashed Americans condone.

Lerma quotes the newly released official pentagon document National Military Strategy of the US 2015, which includes among  its imperialistic goals: “Provide a Global, Stabilizing Presence. The presence of U.S. military forces in key locations around the world underpins the security of our allies and partners, provides stability to enhance economic growth and regional integration, and positions the Joint Force to execute emergency actions in response to a crisis. We are improving our global agility. The ability to quickly aggregate and disaggregate forces anywhere in the world is the essence of global agility. We are striving to increase our agility by improving campaign planning, sustaining a resilient global posture.” These are the neoconservative principles that drive the US government to attack peaceful nations across the globe. We present Larma’s article here:

Fighting the Beast / by Xavier Lerma / Pravda / July 7, 2015 / The innocent slain by the US military or US backed armies all over the world has reached unprecedented levels. The 4th Reich will push for its New World Order at any cost. “Democracy” or “Freedom” are reasons used by the wolf in sheep’s clothing to invade other countries. The National Military Strategy of the US 2015, pretends to protect people but gives an excuse for war. They hire poor Muslims to cause trouble like the Europeans hired Native Americans for their greedy purposes in the New World. We need not stand by and watch women and children get slaughtered. The world as one fist can destroy tyranny with one blow. … MORE 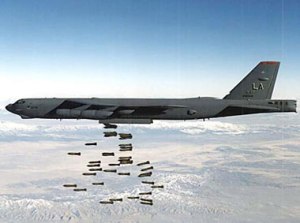 Pentagon Concludes America Not Safe Unless It Conquers The World / by Paul Craig Roberts / Strategic Culture Foundation / July 10, 2015 / The Pentagon has released its «National Military Strategy of the United States of America 2015». The document announces a shift in focus from terrorists to «state actors» that «are challenging international norms». It is important to understand what these words mean. Governments that challenge international norms are sovereign countries that pursue policies independently of Washington’s policies. These «revisionist states» are threats, not because they plan to attack the US, which the Pentagon admits neither Russia nor China intend, but because they are independent. In other words, the norm is dependence on Washington. Be sure to grasp the point: The threat is the existence of sovereign states, whose independence … MORE

US bombing of Baghdad (–commondreams.org)

The motive for US atrocities in the world has become virtually incomprehensible. Hawkish aggression does not strengthen America. What would strengthen America is a free small business environment, true free enterprise for individual people, fair competition in manufacturing, and a powerful middle class. This, not war, is what protects national security. US Government policies have instead destroyed small business, manufacturing, retail, and the middle class.

Quemado Institute therefore concludes that US officials do not work for America; they work for transnational corporate and financial interests. To get to the ultimate cause, we must look beyond puppets like Barack Obama and zero in on the true culprits, both American and European, who exploit the militiary and political machinery of Washington for destructive global purposes. Some harbor hope that a Donald Trump Whitehouse would tackle these devils and bring them to heel. It is these hidden powers that must be identified, influenced and restored to civilized behavior. They keep themselves well concealed, despite the flood of information and disinformation overwhelming us today on the internet.

Patriots are obligated to criticize their governments as a cornerstone of democracy. A goverment that stops listening is a government doomed to failure. We hope there is still time to enlighten the leadership of America and Europe. It is they who must have courage, they who must defy transnational monetary interests that flirt dangerously with natural and political disaster, driving the world to the brink of Armageddon. 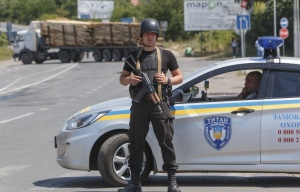