Lavrov: “There’s No Alternative to Minsk” — Not

There has to be an alternative to the Minsk 2.0 Agreements. The prospect for success is zero percent. Short of regime change in the Ukraine capital, there is not even the faintest chance the Kiev government will comply with Minsk, and especially not with the Package of Measures mandate for constitutional reform, which requires approval by Donetsk and Lugansk People’s Republic (DPR/LPR) representatives. And since Kiev will not comply, it would be criminally unjust to expect the DPR/LPR to compromise on an issue so fundamental to human rights, dignity, and life itself.

Despite an impasse obvious to many observers, Russian Foreign Minister Sergei Lavrov, along with Russian President Vladimir Putin, German Chancellor Angela Merkel, Luxembourg’s Minister of Foreign and European Affairs Jean Asselborn, and other high-level Western officials, continues to chant the mantra, “There’s no alternative to Minsk.” Broader thinking on the crisis is long overdue.

The plain truth is, there has to be an alternative to Minsk. The only two possibilities I see that would rescue this fiasco of an agreement are:

1) There lurks in the Moscow-Berlin Axis a plot to crush the DPR/LPR leadership into fatalistic submission until they agree to abandon every shred of autonomy, freedom and self-determination, hence succumbing to unity with Ukraine under Kiev’s genocidal oppression.

Both DPR Prime Minister Alexander Zakharchenko and DPR Minsk envoy Denis Pushilin have called options more benign than this “suicidal”. Meanwhile, those more benign options have vanished. If not dead already, they were killed by Kiev regime leader Petro Poroshenko when he submitted his constitutional amendments — amendments that ignore Minsk as if it never happened, an omission Lavrov astutely notes in the article below. This latter scenario is so brutal and inhuman, it is unfit for the modern world and does not bear consideration.

2) There will be regime change in Kiev, bringing a more reasonable government to power that will enact autonomy for Donbass.

A rosy prospect, but could it happen in time to save Minsk? The constitutional impasse must be resolved by December 2015.

Aside from these two scenarios, Minsk 2.0 compliance is not in our world’s future. Why then do Russian and Western officials continue to push it with bullheaded obstinacy? This is not a rhetorical question. I would be happy to receive an honest answer.

I post below an enlightening article from Novorossia Today on the Sergey Lavrov imperative for the Minsk 2.0 Agreements. Correct on some points, he remains doggedly blind on one issue: the inevitable Minsk Impasse.

Moscow is “deeply concerned” about Kiev’s inability to fulfill its commitments to hold local elections in east Ukraine’s self-proclaimed republics of Donetsk and Lugansk, Russian Foreign Minister Sergey Lavrov said on Friday. Speaking after talks with his Luxembourg counterpart Jean Asselborn, Lavrov said that particular attention at the meeting had been paid to the crisis in Ukraine. “Both Russia and our Luxembourg counterparts agree that there is no alternative to implementing every single provision of the February 12 Minsk agreements,” he said, referring to the peace deal signed by leaders of Russia, Ukraine, Germany and France in the Belarusian capital.

“We emphasised that establishing a direct and mutually respectful dialogue between Kiev and representatives of Donetsk and Lugansk is an essential component of successful movement in this direction,” Lavrov said. “Without this, it is impossible neither to reach a stable political settlement nor to resolve any other issues which should be settled in accordance with the February 12 complex of measures.”

“Russia is deeply concerned about Kiev’s inability and unwillingness to fulfill its commitments to coordinate with Donetsk and Lugansk modalities of conducting local elections and its inability to attract representatives of the self-proclaimed republics to drawing up a new constitution,” Lavrov said after talks with his Luxembourg counterpart Jean Asselborn. Russia’s top diplomat expressed concern that Ukraine’s draft constitution, prepared without participation of Donetsk and Lugansk representatives, “does not fulfill any of the requirements of the Minsk agreements with regard to this document”. He said the draft “does not reflect the tasks of ensuring a special status for these territories on a permanent basis and does not reflect the tasks of decentralization of power” as envisaged in the peace deal reached in the Belarusian capital in February.

Constitutional reform is an important part of the February 12 comprehensive action plan to fulfill the Minsk accords worked out by leaders of Russia, Ukraine, Germany and France in the search for peace in the embattled eastern Donbass region. A key element of reform is decentralization of government with respect to the peculiarities of certain areas of Donetsk and Luhansk regions agreed with their representatives, as well as adopting permanent legislation on the special status of certain Donbass areas.

My comment: In the first sentence, Novorossia Today puts quotes around the phrase “deeply concerned”. Does the publication suspect Lavrov is less than sincere? Lavrov’s third sentence about “implementing every single provision” is either nonsensical, blind, insincere, or a sign of authoritarian heavy-handedness.

Lavrov says some reasonable things, of course. But he stops far short of the goal. Yes, Kiev is violating Minsk. But what is the plan to overcome this obstacle? How can the world get Kiev to comply?

This particular puzzle piece is conspicuous by its absence. 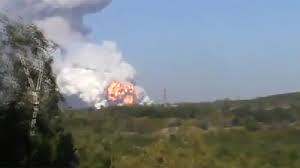 Putin on Minsk: Higher Chance of Success than Failure.
See NEWS FROM NOVOROSSIYA

2,500 Azov Battalion Troops to Train in US