The meeting in Sochi, Russia, which took place today between US Secretary of State John Kerry, Russian Foreign Minister Sergei Lavrov, and Russian President Vladimir Putin, was not only cordial, but fostered an important breakthrough in American thinking. It is a sign of the turnabout we have long awaited, predicted, worked toward and hoped for: the admission, even if brief, that Kiev might be at fault in the Donbass war. No US government official has, to our knowledge, implied any wrongdoing on the part of the Kiev regime, so well-rehearsed has been Western propaganda.

Yet John Kerry has taken a small step toward the enlightenment of official America, stressing that “any Ukrainian efforts to seize the Donetsk Airport through force would violate the Minsk Protocol and would face strict opposition from Washington.”

We present here the full report from Sputnik:

Kerry: Poroshenko Should ‘Think Twice’ Before
Using Force in Donbass

Following an extensive six hour discussion between US Secretary of State John Kerry, Russian Foreign Minister Sergey Lavrov, and President Putin, Kerry stressed that any Ukrainian efforts to seize the Donetsk Airport through force would violate the Minsk Protocol and would face strict opposition from Washington.

On Monday, Ukrainian President Petro Poroshenko vowed to retake Donetsk Airport by whatever means necessary, despite the fact that doing so would directly violate the Minsk deal to move heavy weapons away from the demarcation line. “I have no doubt,” Poroshenko said during the premier of the documentary “Airport,” “we will free the airport, because it is our land. And we will rebuild the airport.”

It’s not the first time Poroshenko has used aggressive rhetoric. Last month, he also insisted that peace in Ukraine would only come with strict preconditions. “The war will end when Ukraine regains Donbass and Crimea,” he said in an interview with the STB television channel.

When confronted with Poroshenko’s plans during Tuesday’s news conference, US Secretary of State John Kerry stressed that any such action would violate the peace talks and would get no endorsement from Washington.

This fell in line with a general consensus agreed upon during the talks. Both the United States and Russia agreed that upholding the Minsk agreement is the only sure way to peace in the Ukraine. “What is important is to make sure that both sides are moving forward in implementing the Minsk accord in its full measure,” Kerry said, adding that he had urged President Poroshenko to honor the ceasefire.

Russian Foreign Minister Lavrov reaffirmed Russia’s commitment to that goal, adding that Moscow and Washington will be using complementary influences and “will not be knocking on the same doors.”

“There are diplomatic mechanisms and we are exploring all of them,” Lavrov said.

In addition to the Ukrainian crisis, the talks focused on a wide range of global issues, and while both sides still face differences in opinion, the two nations see eye to eye on a number of topics.

On the issue of the P5+1 nuclear negotiations with Iran, both sides are in agreement. Kerry stressed that “unity” has been key throughout the talks and will be instrumental moving forward in the final six weeks before the final deadline. Both nations also agreed on the significant threat posed by the self-proclaimed Islamic State terrorist group, and recognized the role of Syria’s destabilization in the group’s emergence. Both sides recognized that bringing a peaceful solution to the Syrian conflict is crucial. “A key task to resolve issues is to have dialogue between all Syrian parties,” Lavrov said, adding that “all stakeholders must urge them to abide by the Geneva Communique.” Lavrov also stressed that he did not want chemical weapons to be a pretext for Western nations to pressure the Assad regime, and thorough investigations into the alleged use of such weapons should be conducted. “We want the conscientious, professional investigation to be conducted, as well as the professional fact-finding, so that there would be no attempts to use the chemical weapons issue to apply political pressure, or as a justification of attempts to use force against Syria,” Lavrov said.

Tass has published two follow-up articles on the meeting in Sochi, Russia, which we present below:

“According to Kerry’s statement, the United States believes that both parties fail to comply with the Minsk agreements,” Pushkov said.

MOSCOW/ The United States has acknowledged for the first time that Kiev doesn’t comply with the Minsk agreements, Chairman of the State Duma International Affairs Committee Alexey Pushkov told reporters on Wednesday. He commented on the remarks by US Secretary of State John Kerry, which he made following talks in Sochi with Russian President Vladimir Putin and Foreign Minister Sergey Lavrov. “I think Kerry’s visit was intended not just to signal a shift in the US stance but, above all, to try to partially restore the dialogue that had been practically severed. Naturally, if the United States wants to resume dialogue, it must take into account Russia’s stand, at least on some issues,” Pushkov said. According to the lawmaker, in this instance the US took into consideration Russia’s position by recognizing that Kiev failed to honor the Minsk agreements. Until recently Washington said that “it clearly saw Kiev’s willingness to implement the accords,” the head of the State Duma committee said. “Kerry has made it clear that in actual fact the United States didn’t see such willingness. According to Kerry’s statement, the United States believes that both parties fail to comply with the Minsk agreements. This is the first time the United States acknowledges that Kiev fails to honor the agreements,” Pushkov added. 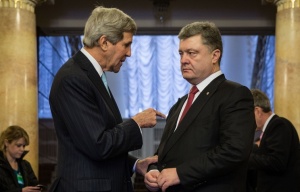 MOSCOW/ The Russian side finds the statement by US Secretary of State John Kerry who warned Ukrainian President Petro Poroshenko against attempts to regain control over the Donetsk airport, to be a very important one, the Russian ambassador to the UN, Vitaly Churkin told Rossiya’24 news channel. “It’s an important thing that Kerry made this statement and that he said the US believed it was crucial to observe the accords reached in Minsk on February 12,” he said. “Let’s hope the Americans would send this signal to Kiev in private contacts (with the Ukrainian officials), too.”

On Monday, Ukrainian President Petro Poroshenko said that the Donetsk airport, controlled by the militia of the self-proclaimed Donetsk People’s Republic (DPR), will be recaptured. “I do not doubt that we will free the airport because it is our land. And we will restore the airport,” Poroshenko said. Kiev forces controlled Donetsk airport terminals for several months, shelling the city’s suburbs from their positions. In January, DPR authorities said that the self-defense forces had regained full control over the airport. Ukrainian forces made several attempts to recapture their positions. DPR defense ministry said around 600 Ukrainian military were killed or injured during the armed stand-off around the airport.

Ceasefire is one of the key point of the Minsk agreements on the Ukrainian settlement. Other points include heavy weaponry withdrawal, prisoner exchange, local elections in Donbas and a constitutional reform in Ukraine.

Kiev “Prime Minister” Fails to Deny Genocide: In Paris, Yatsenyuk Was Asked When He Would Stop the Genocide in Donbass
For this and other news, click NEWS FROM NOVOROSSIYA at top of screen or click here.

Like Loading...
« Donetsk International Forum: Donbass Will Find Way Out of World’s Impasse, Says Purgin
Is a Major Kiev Offensive in Donbass Imminent? »