[Editor’s note: This commentary was originally posted on February 18, 2015. We are reposting it on June 12, 2015 from deleted archives to preserve the record.] 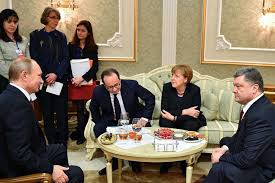 At the time of Minsk Agreement 2.0, the Kiev government seemed to be in a winning position. Its weak pawns and beleaguered knights were suddenly backed by two powerful rooks: Angela Merkel and Francois Hollande, the leaders of Germany and France. Or at least, we at Quemado Institute thought so. In our February 11 news commentary entitled Tripartite Agreement Dangerous for Novorossiya, written based on the preliminary Minsk Contact Group document entitled Minutes of the meeting the Tripartite Liaison Group with Representatives of Individual Regions of the Donetsk and Lugansk Oblasts, we noted three danger points for Donbass Republics:

1.) The laws on ‘special status’ are determined by the Ukraine Parliament, not the Donetsk and Lugansk People’s Republics (DPR/LPR).

2.) The rule to ‘disarm all illegal groups’ is dangerously ambiguous, since Ukraine might declare the Novorossiya Armed Forces (NAF) illegal, thereby precluding Novorossiya’s self-defence in case of a Kiev ceasefire breach.

3.) Elections are to be held only for ‘local authorities,’ implying an end to the Prime Minister positions in the DPR/LPR.

It seemed the underlying principle here was that the Ukraine government was the final authority on the interpretation and implementation of Minsk 2.0. I will call this the Kiev Doctrine, and I’ll refer to it again below.

We weren’t alone in our grim prognosis. Political scientist and military analyst Brad Cabana, in a commentary posted by Red Pill Times on February 12, the day Minsk 2.0 was signed, saw some of the same dangers we did. Among his five key points were: 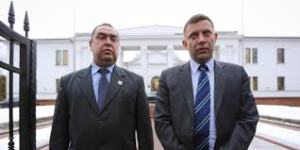 On February 12, after the Agreements were approved in Minsk by all official parties, including the Tripartite Contact Group, the Normandy Four, and the DPR/LPR Prime Ministers, it seemed as if the Kiev regime was poised for checkmate in one. At this critical juncture, the DPR/LPR Prime Ministers Alexander Zakharchenko and Igor Plotnitsky came out with a shocking statement. It looked every bit like surrender. In their joint interview of February 12, Zakharchenko essentially said:

“We have signed an agreement today which I hope will bring the hostilities to an end…. I hope that with this … we’ll see a totally different Ukraine in the future. But it’s impossible not to trust and respect the opinion of the three most significant of today’s presidents, the Russian, German and French leaders, who will guarantee that Ukraine is going to change under the pressure of Donbass. We can’t deprive Ukraine of this chance, because the country itself is going to change. I guess it’s a serious victory for the DPR and LPR. We used to be one with the people of Ukraine, and we will be one with them again.”

I was dumbfounded. That the DPR/LPR would be “one with Ukraine again” struck me as repudiating the DPR’s official Declaration of Independence, approved by the People’s Council. It seemed as if Zakharchenko and Plotnitsky had given their countries away, and rendered obsolete their prime ministerial positions. It looked like total defeat.

It looked like defeat because I was making a hidden assumption. I was assuming the Kiev Doctrine was basically irrefutable, ie.  I was assuming that the Ukraine government was the final authority on the interpretation and implementation of the Minsk agreement. In this erroneous vein, I wrote my infamous commentary of February 13 entitled Minsk 2.0: My Patience Has Ended, in which I deigned to call Novorossiya’s great leaders “betrayers”.

But the Kiev Doctrine wasn’t irrefutable. In fact, Zakharchenko annihilated it in a sudden brilliant move. On Saturday, February 14, he said in a Euromaidan Press interview: “The processes happening here actually have nothing to do with Ukraine. The way Ukraine sees them does not matter at all.” In other words, the “fundamentally irrefutable” Kiev Doctrine was brushed away in a single stroke. It was only a weak pawn, blocking the file of a hidden DPR/LPR rook.

Then the rook came into play. In that same interview, Zakharchenko revealed his next move: “We regard the Minsk agreement a victory, paradoxically, in that we will be able to change Ukraine itself. Ukraine’s constitution and political processes are controlled by us. The Minsk agreement is vague and open to interpretation…. We will regard any attempts of Ukraine troops to break out of the [Debaltsevo] pocket or deblockade it as a violation of the Minsk ceasefire…. We will follow our own election law, already adopted by the People’s Council. Local elections will be governed by this law…. This allowed us to understand the Minsk agreement in this way. We understand it as de facto independence…. This is the way we signed it and the way we understand it…. Minsk allows for providing us with special powers. If our demands of de facto independence are not met, we will keep insisting the territory held by the Ukrainian army is illegally occupied and the borders of the Donetsk People’s Republic are the borders of the Donetsk Oblast.”

By proclaiming de facto independence, Zakharchenko was in essence reinstating the DPR’s Declaration of Independence. This was an example of the chess combination called discovered attack, and on the newly opened file, the rook was poised to trap the enemy queen.

Zakharchenko then moved a bishop to the enemy queen’s diagonal: In a February 16 Life News article, he was quoted as saying, “Debaltsevo and other villages are only temporarily occupied [by the UAF]…. Everything happens for the Minsk Agreement, we stand for their positions. Debaltsevo, this is our rear. And in the Minsk Agreement all illegal armed formations on the territory of Donbass should be disbanded or disarmed, so we [carry out] the disarmament of illegal armed groups.” The DPR/LPR “bishop” I mentioned above, then, is the idea that the Ukrainian forces in the Debaltsevo cauldron are an illegal armed group, positioned to the rear in the DPR/LPR territory.

With bishop and rook in place, flanked by the “queen” of the NAF commanders, their fighting knights, and pawns of the weaponry of the DPR/LPR militias, the enemy queen was poised to be taken. And she was taken on February 17, with the fall of Debaltsevo and the surrender of the trapped Ukrainian army.

Today, the Kiev king appears exposed for a mate in two. We eagerly await the endgame.

Quemado Institute praises the bravery, brilliance and hard work of Zakharchenko, Plotnitsky, their government officials, the NAF commanders and the regular militia forces, who are paving the way for Donbass freedom and self-rule, a status deserved by all peoples of the world, and a principle that lies at the very heart of American political philosophy, despite that it has been forgotten by some of our officials in power.

Editor’s update, June 12, 2015: DPR Prime Minister Alexander Zakharchenko has not deviated from the strategy stated above. The Ukraine Constitutional amendments proposed by the DPR/LPR on June 8, 2015, essentially claim de facto independence as promised. Indeed, the Minsk agreements are ambiguous and open to interpretation, and Zakharchenko has interpreted them exactly the way he said he would.

Like Loading...
« DPR/LPR Constitutional Amendments Guarantee De Facto Independence
Minsk 2.0: Time is on the Side of Novorossiya. »